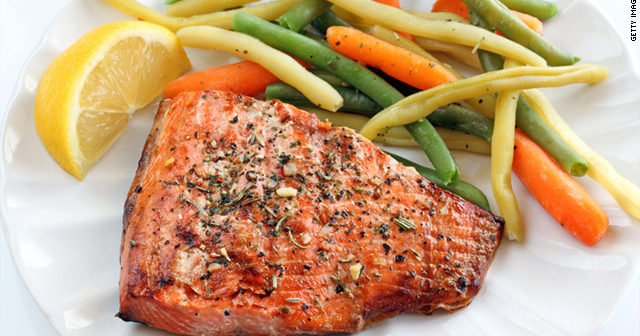 Fish is a low-fat high quality Protein and is the healthiest foods on planet. It is loaded with important nutrients, such as Protein and Vitamin D.

Fish is also the world’s best source of omega-3 fatty acids, which are incredibly important for your body and brain. Proteins, Vitamins and Nutrients that can lower blood Pressure and help to reduce the risk of a Heart attack or Stroke.

1. Fish is high in important nutrients that most people don’t get enough of

Bottom Line: Fish is high in many important nutrients, including high-quality protein, iodine and various vitamins and minerals. Fatty types of fish are also high in omega-3 fatty acids and vitamin D.

2. Fish may lower your risk of heart attacks and strokes

Bottom Line: Eating at least one serving of fish per week has been linked to reduced risk of heart attacks and strokes, two of the world’s biggest killers.

3. Fish contains nutrients that are crucial during development

Bottom Line: Fish is high in omega-3 fatty acids, which is essential for development of the brain and eyes. It is recommended that expecting and nursing mothers make sure to eat enough omega-3s.

4. Fish may increase grey matter in the brain and protect it from age-related deterioration

5. Fish may help prevent and treat depression, making you a happier person

Bottom Line: Omega-3 fatty acids can be beneficial against depression, both on their own and when taken with antidepressant medications.

6. Fish is the only good dietary source of vitamin D

Bottom Line: Fatty fish is an excellent source of vitamin D, an important nutrient that over 40 percent of people may be deficient in.

7. Fish consumption is linked to reduced risk of autoimmune diseases, including type 1 diabetes

Bottom Line: Eating fish has been linked to reduced risk of type 1 diabetes and several other autoimmune diseases.

Bottom Line: Some studies show that children who eat more fish have a lower risk of developing asthma.

9. Fish may protect your vision in old age

Bottom Line: People who eat more fish have a much lower risk of developing macular degeneration, a leading cause of vision impairment and blindness.

Bottom Line: There is preliminary evidence that eating fatty fish like salmon may lead to improved sleep.

11. Fish is delicious and easy to prepare

This article was reposted from our media associate Authority Nutrition. | Source